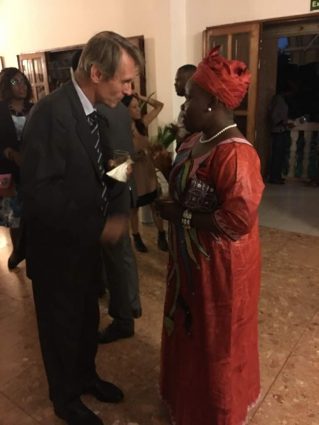 The British High Commissioner to Cameroon, Brian Olley and officials of the Zoological Society of London (ZSL) have reiterated calls for Cameroon to sign up for the Elephant Protection Initiative (EPI) administered by the non-governmental organizations, Stop Ivory and Conservation International.

They appealed to Cameroonians of goodwill to push for their country to be part of the EPI, during a conservation event organized at the British High Commissioner’s residence in Bastos – Yaounde, Tuesday June 20, 2017.

Considering the success of a similar event last year on the theme: “Conservation of wildlife and forests in Cameroon,” the focus of Tuesday’s event extended to include forest communities, organisers said.

According to the Programme Director at the Department for International Investment (DfID) in London, Stephen Mooney, the outfit, through the World Agroforestry Centre, is investing circa FCFA 4.5 billion in conserving Cameroon’s forests and forest communities. However, Cameroon remains a hunting ground as well as a key region for the trading and transporting of ivory.

It is against this backdrop that Winnie Kiiru of Stop Ivory said should Cameroon join other countries like Gabon and Chad in the initiative, Stop Ivory and the EPI could create a regional strategy to combat the illegal wildlife trade in forest elephants and ivory.

The EPI which began with five Heads of State, now has 15 African member countries. Orgainsers told Cameroon Tribune that Tuesday’s event was organized to raise the profile of conservation efforts in Cameroon and to provide a networking opportunity for NGOs, businesses, diplomatic conservation leads, Cameroon Government officials and leading stakeholders.

The British High Commission plans to host the event as an annual affair so that its acts as catalyst and meeting point to help protect wildlife, forests and forest communities in Cameroon for future generations.